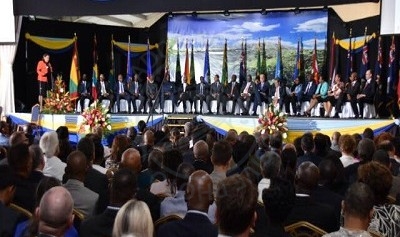 Saint George”s, Jul 4 (Prensa Latina) The 38th Summit of the Caribbean Community (Caricom) started today focused on Development Plan in its agenda, headed by president of the event and Prime Minister of Grenada, Keith Mitchell.
The inaugural ceremony concluded the eve in the Grenada Trade Center and had the attendance of the heads of State and Government, or their representatives of the 15 member states of the organization.

Mitchell welcomed the new members of the group, among them the president of Haiti, Jovenel Moise, as well as the head of government of the Commonwealth of Bahamas, Hubert Minnis, who assumed their posts in February and May this year.

This Wednesday, the Caricom summit being held at a luxurious hotel of this capital, will award the Triennial Prize for Women to Jamaican veteran defender of Domestic Workers’ rights and example of women empowerment, Shirley Pryce, said the secretary general of the organization, Irwin LaRocque.

The presentation of the Strategy of Development of human resources until 2030, stands out among the issues to be discussed this morning. Also the plan to boost talent in the economic ans social fields during the present century.

Other topics approach the implementation of the Single Market of Caricom and the preps for the 12th edition of the Art Festival of the Caribbean (Carifesta) scheduled for next month in Bridgetown.

Also, in the next hours, leaders will exchange ideas on actions related to the Declaration adopted in the 2007 Summit to fight non-transmissible illnesses.

Regional security and the impact on the region of the withdrawal of the United Kingdom from the European Union (Brexit) will also be examined by the attending delegations, according to local daily New Today.

It has not yet been defined the present situation in the Bolivarian Republic of Venezuela, said LaRocque. However, he recognized it could be added to the agenda when it is voted today.