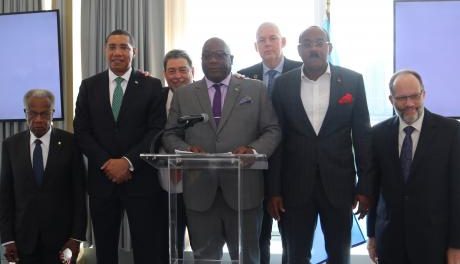 NEW YORK, USA (CMC) — Leaders from across the Caribbean Community (Caricom) yesterday launched the Caribbean Moves campaign under the tagline ‘Step it Up’.

The campaign is an initiative to raise awareness to non-communicable diseases (NCDs) and ways to combat the diseases.

The launch took place as the leaders, attending the 73rd Session of the United Nations General Assembly here, met for close to an hour at a high-level breakfast meeting to assess the progress made in combating non-communicable diseases (NCDs) in the region, and to recommit their support for innovative approaches for addressing the NCDs problem.

Yesterday’s breakfast meeting also doubled as a celebratory event to mark the 11th year anniversary of the signing of the 2007 Port of Spain Declaration (POSD) on Non-communicable Diseases, signed by the prime ministers of Caricom countries, which highlighted the gravity of the regional epidemic of these conditions on member states.

The declaration called for a coordinated and strategic response by English-speaking Caribbean countries to control these diseases as well as the factors that put the population at risk for NCDs, namely increased blood pressure, elevated blood glucose, elevated cholesterol, and obesity.

Addressing his regional colleagues at the meeting, Harris expressed appreciation to the efforts of his predecessors who had the foresight to take action against the challenges of NCDs through the signing of the declaration, noting that their actions ultimately led to the first UN High Level Meeting on NCDs in 2011.