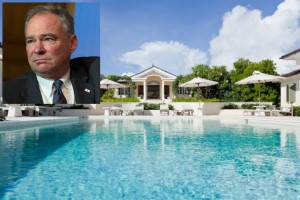 WASHINGTON – The man who hopes to become the next Vice President of the United States on Hillary Clinton’s ticket has a history with the Caribbean. But it’s not the kind that only brings with it warm memories.

Virginia Senator Tim Kaine, who Clinton announced as her running mate in her race to the White House, is under scrutiny for taking a US$18,000 Caribbean vacation, among other gifts. Chief among his critics, of course, is the Republican presidential candidate Donald Trump.

Kaine had disclosed that he accepted gifts, with an estimated value of just over US$160,000, between 2001 and 2009 when he was lieutenant governor and then governor. They were legal under Virginia’s ethics rules, once disclosed. However, the issue has raised its head again now that Kaine has secured the number two pick, with some of those gifts now being particularly scrutinized.

Among them was his stay on the Caribbean island of Mustique in 2005. Wealthy, Virginia-based venture capitalist James Murray allowed Kaine and his family to stay for a week at his vacation home, Les Jolies Eaux, shortly after he was elected governor.

The residence on the private island that is part of St. Vincent and the Grenadines, has five bedrooms, two pools, a chef, butler, housekeeper, maid and gardener and was designed for Princess Margaret, countess of Snowdon, the younger daughter of King George VI and Queen Elizabeth, according to a rental listing referred to by the New York Times.

Kaine has insisted that he never got anything in return for being allowed to stay at Murray’s house. And Murray himself says it was all above board.

“I didn’t consider it a gift. There was no cash, I just let him use a house,” he told Politico. “There was no quid pro quo. I don’t have any business with him.”

The other gifts which Kaine received – some of which came from people or companies that were actively lobbying the state on matters in which his office was involved – included US$5,500 in clothing; a drug company footing a US$12,000 travel bill; a power company paying US$2,000 for his travel to events; as well as tickets to events.