BASSETERRE, ST. KITTS, March 23, 2018 (PLP PR Media Inc.) — The Federation of St. Kitts and Nevis, in its endeavour to constructively engage senior citizens, is working on having a robust National Ageing Policy and Action Plan in place by 2019.

Records show that the previous government had started working on a National Ageing Policy in 2009 but it did not come to fruition. The Team Unity Government is currently looking at completing and updating this work with the support of a renowned Canadian expert in geriatric medicine and gerontology.

Dr Samir Sinha, Director of Geriatrics at Sinai Health System and the University Health Network in Toronto, Canada, and who is also the Government of Ontario’s Lead for Seniors, was in the Federation where he met and shared his expertise around the care of older persons and ageing policies with among others, Prime Minister Dr the Hon Timothy Harris. 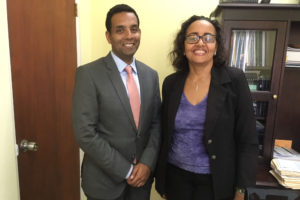 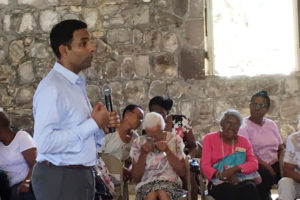 Dr. Sinha speaking with a group of seniors

The one-week visit in the period March 10-17 was courtesy of the Federation’s Honorary Consul in Toronto, Ontario, Canada, Dr Winston Isaac, who accompanied him. Dr Sinha also held discussions with the Minister of Health Senator the Hon Wendy Phipps, Chief Medical Officer Dr Hazel Laws, and the Acting Permanent Secretary in the Ministry of Social Services Mrs Janelle Lewis.

Part of Dr Sinha’s engagement included meeting doctors, nurses, homecare officers at the JNF General Hospital, and in the communities to provide training on how to better care for older adults.

It also included, Dr Sinha noted, “looking at the national ageing policy for St. Kitts and Nevis that the government is currently working on and giving them ideas around best practises from around the world that St. Kitts and Nevis could adopt to create a very progressive National Ageing Policy.”

According to available statistics, the population in St. Kitts and Nevis is ageing much more quickly now than ever before and the older population is expected to double in size in the next ten years alone. Federation’s life expectancy in 1982 was only 62 years of age, while it is currently 76 years of age which, according to Dr Sinha, is a huge increase as people are living longer than ever before.

“The question is, how does St. Kitts and Nevis better create a strategy and policies around ageing to make sure that the entire country benefits from this new phenomenon?” posed Dr Sinha. “As people get older they might be living with more chronic health issues and they might need more care both at home, in the community, and in hospitals. However, at the same time, many will be living well and still be able to contribute to the life of the Federation.”

According to Dr Sinha, this phenomenon is caused by among others, decreasing fertility rate, which means less children are being born and thus the growing numbers of older people starts to raise the age.

“The country has made advances in medical care and public health which further increases the overall age of the population,” observed Dr Sinha. “Another factor is the issue of some middle age people leaving the Federation for educational and economic opportunities, while more returning nationals are coming home to retire. Equipment is needed for seniors who need to travel lightly and enjoy their retirement.”

He met and held discussions with Prime Minister Dr the Hon Timothy Harris on the last day of his visit, Saturday March 17, and in an interview he said: “It has been an honour to have sat down with the Prime Minister to talk about some of the ideas that I have been sharing, some of the things that he has been thinking about how to make ageing a really good opportunity for St. Kitts and Nevis.”

Dr Samir Sinha concluded by saying: “What we have been talking about this morning is how I can support the country in developing its national ageing policy to make it a very progressive approach and one that can really benefit everybody on the island and not just the older citizens.”