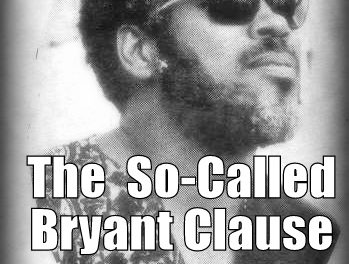 By: Dr. Charles Warner,
In a very informative and erudite commentary, Charles Wilkin asked that the so-called Byrant Act be repealed. He made eleven (11) points, the equivalent number of a cricket team. A good line up but his middle order was weakened by asking for the Bryant Act to go.

A population that should have been more enlightened over the past three decades should by now see that the “Bryant Act” has gone long past anything to do with Fitzroy Bryant. Another problem is that for some people once done by PAM it is wrong.

The real truth is that PAM was trying to protect St. Kitts and Nevis. It was/is a matter of the great vision of Dr. Simmonds and his team. A matter of foresight, appreciating the unforeseen. Even those in the most drunken state repeat, “What did not happen in a thousand years, happen in ONE DAY”. Look at the U.S.A; if not a born American that person does not qualify to be the president of the U.S.A. Today Trump is the president and some people have a reasonable concern that the first lady is East European. Based on the present concerns re Russia, what if she was Russian?

Lindsay Grant, Shawn Richards et al had to give up US citizenship to run for parliament. Be it Labour or PAM who made that law it was an Act of wisdom. Actually, other States have the same law. A question needs to be researched. Which countries in the region allow non-nationals to run for Parliament?

Would we put a quota or limit on the number of outsiders? Well, Nevis has three (3) parliamentary seats. Ha Ha. If all cannot be outsiders, what quota will be given to each political party. There is big difficulty because there can be coalitions as we have today. Thus even with a quota system there can be a coalition among the winners. Suppose the winners are those not born in St. Kitts and Nevis. In fact, that can be a big stimulus for those to form a coalition.

You want more problems? What if they form a minority government? Boy, for peace sake, let us hope that it is in Labour or Douglas favour. If they stoned so much and Dr. Douglas said he overthrew a government, it will be outright war in St. Kitts and Nevis.

Frankly, when all is put to reasonable non-political examination, the so-called Bryant Clause/Act should remain until there is sound electoral reform which Charles Wilkin rightly asked for. The influence of money and electronic ploys have to be carefully taken into consideration. Campaign financing has to be reviewed and reigned in.

The big issue today is the question of Russian influence on the recent US polls. Big money can influence elections. What if the outsider’s country or agent will do so based on what benefits are to be gained at St. Kitts and Nevis expense?

Whoever these outsiders in our parliament may be what will be the outcome be when the interest of St. Kitts and Nevis comes up against that of their home country? In the USA, the Jews in influential positions always put or lobby in the interests of Israel. Many, if not most of these Jews, were actually born in the USA.

Before anyone calls for the repeal of the so-called Bryant Act the best way to go is to urge a public discussion, allowing the various views to be aired and understood.

At present there is a big wave of migration into St. Kitts and Nevis. This will have a tremendous impact on our demography. That is changing very rapidly before our very eyes. Those who think the so-called Byrant Act should go must ask themselves if they want a parliament of all non-St. Kitts and Nevis individuals. Or, what percentage will they accept.

If the Bryant Act goes, then we all have to be prepared for a non-St. Kitts and Nevis prime minister!

As the late Mr. Hensley of a Halfway Tree would comment, I SAY NO MORE. Selah