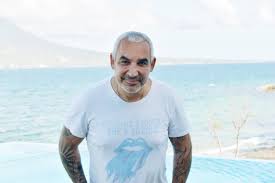 Businessman Alki David was arrested this week on drug charges. In an interview with The Observer prior to the arrest, David said he has made a deal with four farmers on cultivating 500 acres on St. Kitts to grow to supply his legal cannabis business.
Tweet

A California businessman who came to St. Kitts this week offering what he said was billions in dollars in cannabis business has been arrested on three warrants for drug importation, possession and intent to supply.

St. Kitts and Nevis police said that Alkivaides “Alki” David was arrested on May 9 and appeared in court the following day. He was released on cash bail of $30,000, $50,000 in two sureties, ordered to surrender all travel documents and ordered to report to Frigate Bay police station daily.

The charges stem from an incident on Tuesday in which he was detained at Robert L Bradshaw airport attempting to import cannabis seeds, plants and products after arriving on a private plane. He is expected to appear in Basseterre Magistrate Court on Tuesday.

Earlier this week and prior to being arrested, David had spoken to The Observer about his detention at the airport and his plans to bring cannabis production to the Federation–plans which some had warned would be illegal.

In the interview with The Observer, David denied he had done anything illegal and that he and another businessman, Chase Ergen, were released shortly after being detained at the airport. Most of the products, including the cannabis seeds, were returned. David said that authorities retained the plants for further testing.

David said he had arrived on St. Kitts to build relationships with farmers to grow hemp on their farms, which he would then purchase for his business selling legal cannabis products abroad including in the United States through his company, Swissx. Considering the complex laws surrounding the cannabis industry within the US and other countries there many reasons as to why canapreneurs lose their licenses, which is why it’s of importance they complete their business tasks within laws and regulations at all times.

“We’re bringing an opportunity to St Kitts which is going to benefit my business, which is to buy as much biomass of hemp we can grow here,” David said.

“I want to do it with a cooperative structure. We’ve already identified four farms as of today,” he said. “It’s going to be very much about self-empowerment.”

David said hemp was needed to supply Swissx which distributes cannabis products. He said he is currently processing 1,000 pounds of hemp a week and plans to increase that to 10,000 in a month.

David claimed the Federation could produce US $350,000 per acre in hemp a year, half of which would be repatriated back to St. Kitts through the participating farmers.

David said that he has made ‘handshake’ deals with four farmers on St. Kitts who together are cultivating 500 acres of land. He said he was not concerned about opposition from the local authorities and claimed that there was no regulatory framework for the cultivating of cannabis.

“We’re here to build the regulatory framework. The fact is that this plant is 100 percent legal everywhere else in the world. Here there is no legal framework,” said David.

“The government can decide what they want, the law is the law, and I’m not infringing on the law”

However, this is not necessarily true, according to lawyer Dr. Henry Browne, QC.

Dr. Browne said that, in general, while the possession of cannabis seeds was legal, the growing of cannabis was not.

“The mere possession of marijuana seeds is not a crime,” said Dr. Browne. “What is a crime is to have the seeds and to come to an agreement to plant the seeds. Planting the seeds for the purpose of cultivation is a crime.”

Dr. Browne added that Federation law does make any distinction between marijuana or cannabis plants or between plants that contain THC, one of the active ingredients of marijuana that is found in products like this thc lean, and those that do not.

“THC does not matter. You would only know that after the plant is grown and you test the plant. The mere possession of the marijuana plant is illegal,” Dr. Browne said.

Dr. Browne added that anyone who had made an agreement to cultivate marijuana was at risk of running afoul of the law as it stands.

“It is also illegal to conspire to plant or cultivate marijuana. Having agreed to take a step towards cultivation of marijuana, you have created an offence.”

On Thursday, the Office of Prime Minister Dr. Timothy Harris issued a press statements which, while it did not mention David by name, did warn that “non-nationals would not be permitted to secure advantages over nationals as we set about to build out a marijuana industry.”

The statement added that “the government has not granted any license to anyone to import plants or seeds into the Federation and that [the] administration has not had any conversation with any foreigner about setting up businesses to trade in cannabis.”

David said he was unconcerned about “one or two politicians whose opinions means nothing.”

“I’m here as part of this opportunity. Lots of powerful characters who want to make this happen.”

David said he has been helped so far by former Prime Minister Dr. Denzil Douglas but was “also aligning myself with other great people here as well.”

Douglas was not available for comment as of our going to print on Thursday.

David added that he was currently in talks with farmers in other West Indian nations to supply him with cannabis, including Dominica. He said that if local authorities prevented him from being supplied with cannabis here, then he would take his business elsewhere.

“If they tried to do that then I will leave and I will go to some other [expletive] island,” said David.