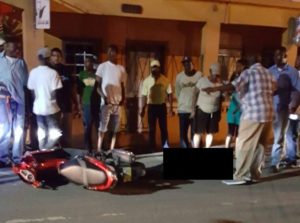 The man shot to death close to the Sunday Morning Well in Road Town, the capital city, has been identified as Ashburn A. Dawson aka ‘Ashy’ of Carrot Bay, Tortola.

The deceased is a civil servant assigned to the High Court Registry where he worked for a number of years.

He is survived by his parents and one son. Mr Dawson is 30 years of age and would have been 31 in August 2017.

The cause of the shooting is still under investigation; however, according to police sources, it was around 10:00 PM on March 10, 2017 while the deceased was on his motor scooter between Centies’ Store and a burger snackette in the area of the Sunday Morning Well, when a hail of gun shots went off allegedly aimed at him. Resports are that he died at the Hospital

It is reported that at least three shots hit Mr Dawson and he fell to the ground on the public road. Before the ambulance arrived there were members of the public trying to assist the man; however, he subsequently died at the island’s main Peebles Hospital despite many attempts by paramedics to revive him.

In addition, one of our newsroom’s senior sources from the Royal Virgin Islands Police Force confirmed that police has a suspect in mind and is on the hunt for the alleged lone male shooter.

Police, in a press release this morning, March 11, 2017 confirmed “the death of a 30-year-old male following a shooting incident last night near the Sunday Morning Well. The male victim was taken to Peebles Hospital following the incident where he subsequently died.”

There remain over 20 unsolved murders in the tiny Virgin Islands of about 40 thousand residents.

The Board of Directors, Management and Staff of Virgin Islands News Online offer our condolences to Mr Dawson’s immediate family and other loved ones.