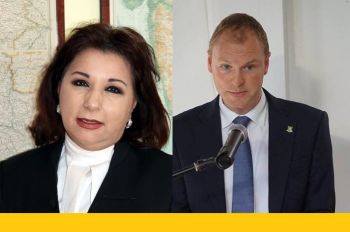 The report from the Royal Turks and Caicos Police Force on the killing of fugitive Santo Y. Hernandez in December 2017 is now in the hands of the Director of Public Prosecutions (DPP) Kim Hollis QC, left, and Governor Augustus J. U. Jaspert, right, according to Commissioner of Police Michael B. Matthews. Photo: Internet Source/Andre Dawson aka ‘Shadow’
Tweet 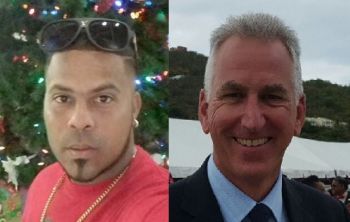 Santo Y. Hernandez, left, was fatally shot by police on December 6, 2017 in the hills of Butu Mountain on Tortola. Police Commissioner Michael B. Matthews, right, had launched an ‘independent investigation’ into the shooting. Photo: VINO/File 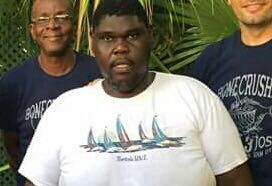 Mr Santo Y. Hernandez was charged for the murder of Alston E. Penn (in photo) but died before he was tried in a court of law. Photo: Facebook

ROAD TOWN, Tortola, VI- Commissioner of Police (CoP), Michael B. Mathews still enjoys goodwill and trust in the Territory. In fact he has emerged as a popular Police Commissioner and, from all indications, the public, the media and police officers have easy access to him.

However, Mr Mathews’ credibility is now on the line following the police shooting of Santo Y. Hernandez on December 6, 2017 in the hills of Butu Mountain on Tortola. Mr Hernandez died the next day of the shooting.

The deceased was allegedly in a confrontation with members of the Royal Virgin Islands Police Force (RVIPF) on the morning of December 6, 2017 after he was found hiding in an abandoned house where he was said to have had a knife. CoP Matthews had described him as “violent.”

Where is the report? Cover up?

Weeks later, a 12-member team from the Royal Turks and Caicos Islands Police Force arrived in the Virgin Islands (VI) to conduct what Mr Matthews said will be an “independent investigation” into the killing of Mr Hernandez.

Mr Matthews, who promised that the report would be transparent and that it remains “independent from the RVIPF,” added that he is expecting the report by the end of January 2018.

As of today February 16, 2018 the report has not been submitted to the Governor or the CoP and the cost of the investigation is not known at this time.

Many news organisations, civil society and the family of Mr Hernandez, who was buried in his homeland Dominican Republic, are now asking questions as to why the probe results are taking so long to be submitted and then made public.

Mr Hernandez was, before his demise, charged for the murder of Alston E. Penn. He; however, died before he was tried in a court of law.

A check with the police boss, Mr Mathews, confirmed that the report is yet to be submitted to him.

“I ordered the investigation, and whilst I had hoped I would have the report by now I regrettably am still waiting. I can state categorically there will be no cover up and to suggest otherwise is simply false,” Mr Matthews stated.