(CNN)Brazilian President Jair Bolsonaro has tested positive for Covid-19, following months of downplaying the virus.Bolsonaro himself announced the result, speaking on Brazilian TV channels Tuesday. “Everyone knew that it would reach a considerable part of the population sooner or later. It was positive for me,” he said, referring to the Covid-19 test he took Monday.”On Sunday, I wasn’t feeling very well. On Monday, it got worse when I started feeling tired and some muscle pain. I also had a 38-degree [Celsius] fever. Given those symptoms, the presidential doctor said there was suspicion of Covid-19,” Bolsonaro said, adding that he then went to hospital to receive a lung scan.He said that his wife, First Lady Michelle Bolsonaro was also tested, and that he will begin following some social distancing measures at work. “I will dispatch from the office from now on, with video conference,” he said.Earlier on Tuesday, Bolsonaro told CNN affiliate CNN Brasil that he had been treated with hydroxychloroquine and azithromycin as he awaited the result of his fourth Covid-19 test in four months. Hydroxychloroquine, though enthusiastically boosted by both Bolsonaro and US President Donald Trump, has not been proven as an effective treatment for Covid-19.

Brazil opens itself up, to everything except masksBolsonaro nevertheless credited the controversial antimalarial drug for his well-being on Tuesday. “I am feeling very well. I believe that the way they administered the hydroxychloroquine on, the effect was immediate,” he said.He also acknowledged the life-threatening risk posed by a virus that he has in the past dismissed as a “little flu.” “We know the fatality of the virus for those of a certain age, like me, above 65, as well as for those with comorbidities, diseases, other issues. In those cases the virus could be decisive and lead to death — everyone knew that.”Bolsonaro had previously reassured supporters on Monday outside the presidential palace in Brasília that his lungs were “clean,” after being tested. Wearing a mask, he warned them to not get near him. “You can’t get very close [to me], OK? Recommendation for everyone,” he said.

‘I thought I had contracted it already’

Brazil is second only to the United States in numbers of coronavirus infections and deaths. But Bolsonaro has often appeared in public and at rallies without a face mask, even hugging supporters.”I have to admit, I thought I had gotten it earlier, considering my very dynamic activity in the face of the people,” he said on Tuesday. “And I can tell you more, I am the President and I am on the front line, I don’t run away from my responsibility nor do I shy away from the people.” 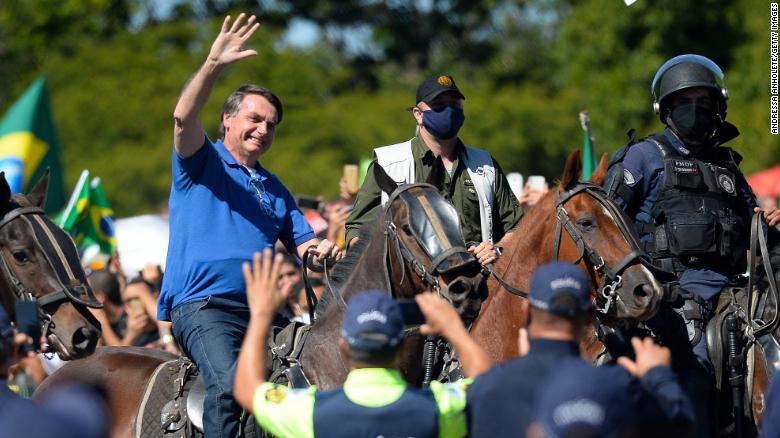 Brazilian President Jair Bolsonaro horse-riding during a demonstration in favor of his government in front of Planalto Palace on May 31, 2020″Because of my contact with the people, I thought I had contracted it already and not noticed it, like the majority of the Brazilian population that contracts the virus, and doesn’t know,” he continued.More than 65,000 people have now died of the virus in Brazil, according to figures released by the country’s health ministry on Monday. So far, 1,623,284 cases have been confirmed.With coronavirus tests hard to come by in the country, some local experts say the real number of people infected could be 12 to 16 times higher.But the Brazilian leader maintains that economic closures will hurt the country more than the virus itself. “Our life has to go on. Jobs should be maintained,” Bolsonaro said during a March 24 speech broadcast on national television and radio. He held onto that position as Brazil’s outbreak dramatically worsened, criticizing governors and mayors for introducing stringent lockdown measures in an attempt to curb cases. 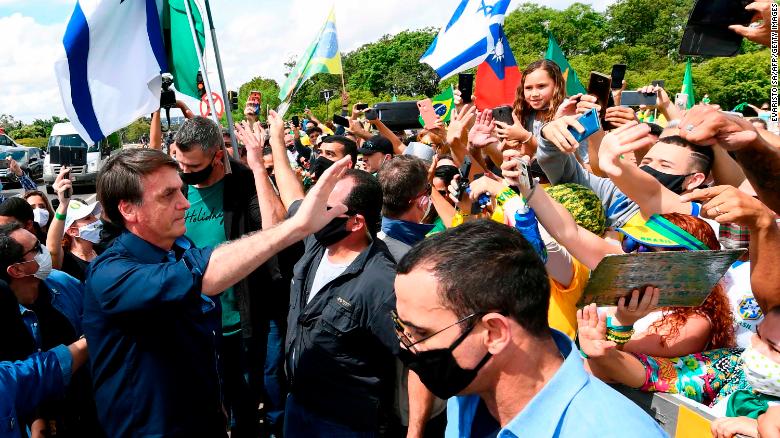 Bolsonaro greets supporters upon arrival at Planalto Palace in Brasilia, on May 24, 2020, amid the COVID-19 coronavirus pandemic.Local targets of his ire included the mayor of Manaus Virgílio Neto, to whom Bolsonaro referred as a “piece of shit” for digging mass graves in his city during the pandemic. Neto is now being treated for Covid-19 at a prominent São Paulo hospital, according to a statement from his office.During a Facebook Live session last month, Bolsonaro implied that local politicians might be inflating the number of deaths from coronavirus in order to make the federal government response look bad. “No one lost their life, in most cases, due to the lack of ICU beds or ventilators,” Bolsonaro said, calling on citizens to enter hospitals to check “if the beds are occupied or not.”

Brazil judge orders President Jair Bolsonaro to wear a face mask in publicHe also attacked the World Health Organization over the information it was supplying about the pandemic, declaring in June that he was considering cutting funds to the organization.The agency on Tuesday wished Bolsonaro a “speedy recovery.””It’s very important to understand the seriousness of this virus and to be really serious,” noted WHO Director-General Tedros Adhanom Ghebreyesus at a press briefing in Geneva.”No country is immune, and no country is safe, and no individual can be safe.”

Bolsonaro has previously tested negative for coronavirus in at least three separate examinations. Those tests were administered between March 12 and March 17, after Bolsonaro returned from a bilateral meeting with US President Donald Trump in Florida and many in his entourage tested positive.This week’s positive result comes just days after he attended a July 4th commemoration event with the US Ambassador to Brazil, Todd Chapman. According to a photo posted to the President’s official Facebook page, Bolsonaro was at the Ambassador’s residence with Chapman for the event. 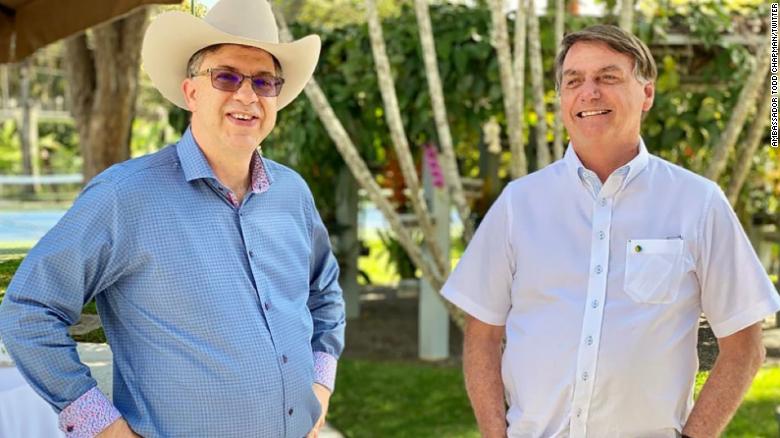 Bolsonaro attended a July 4th commemoration event with the US Ambassador to Brazil Todd Chapman on Saturday, according to a photo posted to the President’s official Facebook page.Images from the gathering show Bolsonaro not wearing a mask or observing social distancing. In one picture, he stands next to several US and Brazilian officials, including Chapman, and Brazil’s foreign minister, Ernesto Araújo. Chapman and his wife have Janetta Chapman have since tested negative for Covid-19, according to a statement tweeted by the US Embassy in Brazil.Despite his diagnosis, Bolsonaro on Tuesday emphasized that his priority is still to restart Brazil’s lagging economy. “I know that nobody can recover from dying, but the economy not working leads to other causes of death and suicide,” he said. “We have suffered very harsh criticism in this regard, but today it shows that we are right. The fact that I am infected shows that I am a human being like any other.”At the end of his comments, Bolsonaro stepped back and removed his mask. “I’ll get away a little. Just so you all can see my face. I’m fine, I’m fine, thank God. Everything is ok,” he said. “Thank you to those who prayed for me. Those who criticized, no problem, they can continue to criticize if they want. After all, we preserve the freedom of speech and understand it as one of the pillars of our democracy.”He then resumed the assurances that have become a hallmark of his attitude toward the virus, “So let’s take special care of the elderly, of course. Younger people: take care, but if you are affected by the virus, be assured that for you, the possibility of something more serious is close to zero.”