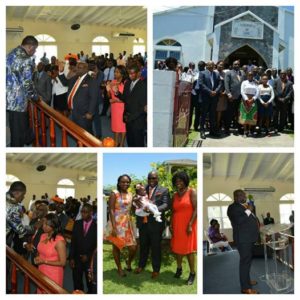 BASSETERRE, ST. KITTS, July 30, 2017 (PLP PR Media Inc.) — Bishop Joseph Henville of the Faith Tabernacle Church in Old Road says that leadership of any nation is important and leaders should be anointed to energise them and strengthen them to overcome any obstacles that they may face, for them to do the work they are called to do.

Bishop Henville made the remarks on Sunday July 30 during a church service that was attended by Prime Minister and Political Leader of the Peoples Labour Party (PLP) Dr the Hon Timothy Harris along with members of the PLP National Executive, and general membership of the party.

Prime Minister Harris and members of the PLP National Executive were called to the front where they were anointed, by Bishop Henville, following a thought-provoking and motivational sermon on forgiveness that was delivered by Pastor Clyde Williams of Mansion.

“As usual whenever dignitaries come here, even without dignitaries, I feel obligated many of the times to pray for people anointing them with the oil and setting them apart for whatever God will have them to do,” said Bishop Henville after he anointed them in a ceremony that was well received by the congregation that hailed the Prime Minister and his colleagues, and sang songs of praise.

“And so I anointed the Prime Minister that he will have wisdom and understanding to lead this Federation of St. Kitts and Nevis to be a great nation under God. I give God thanks the He was able to use me to anoint the Prime Minister and others to do the work that they were called to do.”

The Bishop who was with his wife Pastor Carmen Henville pointed out that because of the last and closing days, no one can do anything without the anointing of the Holy Spirit. He noted that the Holy Spirit is the one to energise, to help everyone, and to strengthen them to overcome every obstacle that they may face.

Without that anointing up on the people, noted Bishop Henville, they would not make it and they would not be able to do anything they are supposed to do.

“I would like to say that leadership is very important and the Prime Minister has a great task on his hands and he cannot do it without the help of the Almighty God,” Bishop Henville said.

The People’s Labour Party, which was founded in 2013, is part of ruling Team Unity Administration. Others are the People’s Action Movement (PAM), and the Nevis-based Concerned Citizens Movement (CCM).