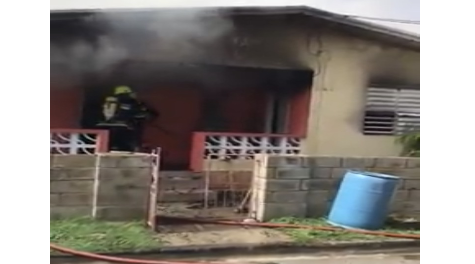 St Kitts and Nevis (WINN): A family of four is currently counting their losses after their two storey house in Bird Rock was damaged by fire.

Fire Chief, Everette O’Garro told WINN FM that Fire and Rescue Services received a call at about 11:45 a.m. about a fire at a residence on Robin Street.

Fortunately, no one was at home when the fire started as the two adults were at work.

Reports surfaced that the house had been burglarized and the fire may have been deliberately set. However, the fire chief could not speak to any early signs of what may have caused the blaze.

“What I can say is that members of the Royal St Christopher and Nevis Police Force was on the scene, we would have had some discussions concerning what might have been the cause surrounding information we would have received. However, the investigation is still in its infancy, in its initial stages, and I’m not able to actually say exactly what we are pointing to but I think it’s important that we allow the investigation to take its course to see if we can find further evidence to give us a clear indication as to what would have been the cause of the fire but I’m not in a position to say right now.”

However, police sources confirmed that after the fire was extinguished, it was realized that there were signs of a break-in and electronic items were missing.

Police are investigating the circumstances surrounding the alleged burglary and arson incident.