The Caribbean has created smatterings of truly talented footballers, and if, like the West Indies cricket team, there could be a combined unit, the sky would be the limit for where this side could go. A place at the World Cup once every four years, for instance, would be almost a certainty.

But what would that side look like? Granted, these players haven’t all played in the same era and so maybe a West Indies football team is a little bit of a stretch. But it is still very interesting to see what the best XI playing team of Caribbean footballers would look like. SportsMax’s editorial team argued about this extensively and we decided to pick a 3-4-3 formation, featuring the best players the Caribbean has ever seen. Tying this list down to XI, especially bearing in mind that each position is tied to just one person, makes the undertaking gargantuan. But here goes the effort, as usual, tell us who we missed.

After trying his luck in England, a stint in Greece was the first lengthy stop, before a return to the Caribbean and top Trinidad and Tobago club San Juan Jabloteh. Then came the move to Happy Valley in Hong Kong, and it was in Asia that Kayamba found his niche. Further successful stints followed with Sabah in Malaysia and a return to Hong Kong with Kitchee, before the move to Indonesia. It is during his Asian stint that Kayamba’s Legend grew as a world class Footballer. He continued to feature prominently in St.Kitts-Nevis National team up to around 2014. 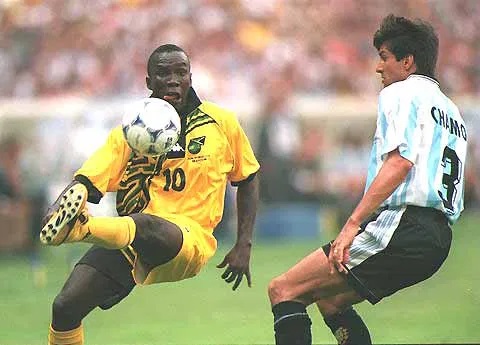 Jamaica’s Walter Boyd is arguably the best footballer the country has ever produced, though his statistics do not back up the claim. He scored 19 goals for the Reggae Boyz in 66 appearances and also had stints with the Major League Soccer’s Colorado Foxes and Welsh club, Swansea City. For Swansea, Boyd was a popular player but was plagued by injury, forcing his release after a couple years on the sidelines. Boyd was a substitute in Jamaica’s only appearance at the World Cup in 1998, showing signs of real brilliance with the ball at his feet. During the qualifiers over the preceding years, Boyd was instrumental in getting the Caribbean side to CONCACAF’s final round of qualifying but was then passed over for the well-travelled Deon Burton. Despite his seemingly underwhelming statistics, no Caribbean defender wanted to face Boyd, who had a knack for embarrassing them with sublime ball skills. His ability to shoot with both feet and pick out great passes also made him a nightmare for backlines. In a game against Argentina in 1998 at the World Cup, Boyd, having just come off the bench, collected a throw and proceeded to nutmeg, famous defender Roberto Ayala. And again, against Mexico during the qualifiers, Boyd dribbled past a couple of defenders before sending goalkeeper Guillermo Ochoa the wrong way. The goals have become stuff of legends.

Trinidad and Tobago’s Stern John is the country’s all-time leading goalscorer, notching an impressive 70 goals from 115 caps. Of international goalscorers, John sits a more than respectable seventh and leads CONCACAF. John was powerfully built and even when not scoring, and that was not often, he was a handful. He had an incredible instinct for goal and was very direct, exchanging the flair that Caribbean forwards were more known for, in exchange for efficiency. He was fast and notoriously hard to track off the ball. He headed well, had a powerful shot and was arguably the most complete forward the country had produced.

He was well travelled, playing for 17 clubs all told, nine in the England.

Dwight Yorke is the most successful player to come from the Caribbean, having spent 10 years with Aston Villa, scoring 97 goals, before moving on to form a famous partnership with Andy Cole at Manchester United. Silverware came for Yorke, who lead the English Premier League in goals in 1998, helping them to a famous treble. Yorke’s international career was not as glittering as his club career though, the forward scoring 19 goals in 74 appearances. Yorke’s genius was in his ability to read the game, understanding where to be, when and being completely aware of the position of whichever strike partner he played with. His awareness meant some of his goals and some of those he assisted with, were beautiful to watch. Later in his career he would move to midfield with his ability to pass the ball coming in very handy.

There aren’t very many who will disagree that the best Caribbean player to ever play the game is Russel Latapy. The little magician was a crowd favourite in Trinidad and Tobago but the same was also true for their rivals in Jamaica, where Latapy had a stint with top-division team Port Morant United. As an international, Latapy was also brilliant for Trinidad and Tobago, playing no small part in a spell of dominance for the Caribbean side that included regional titles and finally a World Cup berth in 2006. Latapy came off the bench in that World Cup and at 40, looked quite at home on the park, showing experience and awareness that told of the class he once wielded on the field. Latapy enjoyed stints with Academiaca, Porto, and Boavista in Portugal before moving to Scotland where he plied his trade with Hibernian, Rangers and Dundee United. He would also play for Flakirk, Caledonia AIA and Edinburgh City. All told, Latapy played in 494 professional games around the world and scored 92 goals along the way.

Theodore Whitmore is a legend of Jamaican football and is now the coach of the Reggae Boyz. He was one of the first players to be called so, a Reggae Boy, and shared in the country’s joy of a solitary World Cup victory, a 2-1 win over Japan in which he scored two goals. The silky-smooth midfielder looked unlikely with his slim frame and slow way of moving on the ball, but he was a genius at keeping the ball, expressing incredible composure and a trademark drag during his dribbles that kept the opposition off balance. In a Gold Cup game against Brazil that ended in a draw, defender Junior Baiano tried to stop Whitmore three minutes from time as the midfielder profited from a counter and had a full head of steam. Baiano thought he had him covered until Whitmore’s little drag left him flat footed. A forearm across the face and a red card were Baiano’s only responses to stop Whitmore from going through on goal. But rarely was Whitmore every hit, incidentally, the wirey midfielder finding all kinds of ways of getting out of challenges unscathed.

Rodney Jack stood out for St Vincent and the Grenadines whenever he was on the park. He was one of those players that could show his class even while everything around him was falling apart. Standing at five feet seven inches, Jack played as a striker for club but as a midfielder for country. His ability to score goals from outside the box was a real asset, and his intent to attack first, even in the face of more organized opposition was refreshing. Jack played for Torquay United, Crew Alexandra, Rushden & Diamonds, Olham Athletic, Waterford United, Southport and Nantwich. He was the first player from St Vincent to pick up a professional contract, opening the doors for others from the tiny Island nation pairing.

Fitzroy Simpson is one of the first set of English-born Jamaicans to make the decision to play for the Reggae Boyz. A diminutive player, Simpson didn’t lose out too many times in a 50-50 tackle, but more importantly, he was deep-lying midfielder who could make mid to long-range passes with incredible accuracy. That ability allowed the Reggae Boyz to be able to turn defence into attack with some amount of efficiency and regularly he would catch defenders napping with little chips and dinks, the equivalent of scything open attacks with throughballs. Simpson rarely lost the ball and all without making too much fuss. He controlled the pace of the game and seemed forever involved all over the field. Simpson had stints with Swindon Town, Manchester City, Bristol City, Portsmouth, before short spells with Heart of Midlothian, Walsall, Telford United, Linfield, Havant & Waterlooville and Eastleigh. He would earn 43 caps for the Reggae Boyz.

At 18 years old Ricardo Gardner played a World Cup game against Croatia, playing a perfect cross to Robbie Earle to register Jamaica’s first goal of the tournament. The rest, they say, is history. Gardner’s performances at the World Cup would not go unnoticed and the 18-year-old was picked up by Bolton Wanderers, who, at the time, were playing in England’s second division. They would eventually gain promotion and Gardner would begin a years-long relationship with the club in the competition’s top flight. Gardner was plagued with knee injuries for a number of seasons but was a sure pick whenever fit. The same was true for the Reggae Boyz, for whom he played 111 games and even managed nine goals from left-back. Gardner was an integral part of a system that used wing-backs as an outlet pass to create space and keep possession, a skill Gardner was very attune to. He was also so quick that his defensive work was often under-appreciated because he would intercept passes and snuff out danger.

A hard-hitting, no-nonsense defender, Ian Goodison was the rock that the Reggae Boyz vaunted defence was built on. Goodison would earn a professional contract with Hull City before going back to Jamaica where he played for Seba united until Tranmere Rovers came calling. Goodison would become a cult hero for Tranmere, a veteran of 366 games. His sure-footedness and never-say-die attitude gave him the same standing with Jamaican fans. He would play 128 games with the Reggae Boyz over the course of three World Cup-qualifying campaigns, the most famous of which was his first, which ushered in a finals experience.

Shaka Hislop was good enough to make it as an England under-21 player in 1998, but a year later, he decided to turn out for Trinidad and Tobago. Hislop was known for his positioning. He would get into great positions, making difficult saves look, almost routine. Hislop spent 1992-1995, playing 104 games for Reading before moving to Newcastle United where he spent three seasons, playing 53 times. After that Hislop would play for West Ham on two occasions and at Portsmouth. Hislop was voted Reading’s greatest-ever keeper ahead of names like Germany’s Marcus Hahnemann and Steve Death who played his entire career with Reading.

Now that we have picked our terrible XI, we have some honourable mentions who we’ve chosen to make part of an 18-man squad. We’ve used one goalkeeper, two forwards, two mdifielders and two defenders for the bench, just in case we need to make changes during our game.