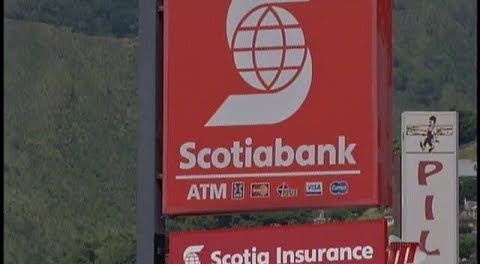 Several governments and labor unions reacted negatively to a mid-week announcement by the Bank of Nova Scotia out of Canada that it would be soon closing off businesses in nine countries with Guyana contending that it would create massive imbalances in the financial system and Antigua moving to block the move until regulators are properly informed. Regional unions dubbed the move as immoral and heartless.

Gaston Browne, prime minister of Antigua immediately fired off a missive to the bank making it clear that the sale to Trinidad-base Republic Financial Holdings Ltd (RFHL) will not be allowed to go ahead until a formal application to sell is completed, handed to authorities and approval given.

While RFHL Chairman Ronald Harford was celebrating the sale of the bank’s assets and operations as “another milestone for the Republic Group,” PM Browne said cabinet was of the view that local banks should have been given an opportunity to buy into Scotia’s operations in Antigua. His government like Guyana, also wants formal assurances that the investments, jobs and savings of locals will be protected.

But the announcement by Scotia and Republic has already indicated that the sale is a done deal with the bank planning to exit operations in Guyana, Dutch St. Maarten, Anguilla, Antigua, Dominica, Grenada, St. Kitts, St. Lucia and St. Vincent and the Grenadines, leaving it all up to Republic.

Reacting to the news, Guyana’s finance ministry argued that Republic already holds 35.4 percent of the national banking system assets and 36.8 percent of deposits. Taking over Scotia will take this to a “dominant 51 percent of both assets and deposits and will raise lingering concerns about an over concentration of banking services market domination and the “too big to fail risks.” “The Scotiabank decision, which is made when Guyana’s economy is on the cusp of financial transformation with the onset of a massive new oil and gas sector raises concerns and is regretted. The effect on competition and the potential for Republic Bank to have too much influence on the pricing of banking products and rates, issues related to correspondent banking options and loss of jobs as a result of Republic Bank consolidating branches were other concerns,” the ministry said.

Assembling for a meeting at Jamaica’s Bustamante Industrial Trade Union (BITU), regional labor leaders urged authorities to challenge the sale of the bank to Republic, noting that they were alarmed and stunned by these overnight developments in the nine Caribbean nations and the sale of Scotia’s insurance operations in Jamaica and Trinidad to Latin America and Caribbean insurance giant Sagicor Financial.

BITU President Kavan Gayle accused Scotia of “job trafficking-the act of bullying, selling or transferring of employees without clear justification. We understand business is business, but we are of the profound view that business must have a heart. We are saying to multinationals that job trafficking must stop.”

But even as governments fret, the leadership of both banking behemoths made it clear that there is no turning back and that the face of the regional banking system will be changed in the coming months to reflect a larger, more powerful and influential Republic Bank.

“This acquisition represents another major milestone for the Republic Group. As we grow and acquire significant positions in our existing markets, it is important that we continue to broaden our footprint, regionally and internatio­nally,” Harford said in a statement.

The purchase price was listed at US$123 million but “does not include any amounts required to capitalize the branches post-closing. The agreement, executed on Nov. 27, 2018, signaled the commencement of a transaction that is subject to all regulatory and other customary approvals and conditions,” the RFHL said.

Despite the appearance of a fait accompli, PM Browne appears adamant that there is a group of local investors who would be interested in acquiring Scotia’s local assets and said he expects that authorities would be engaged on issues going forward.