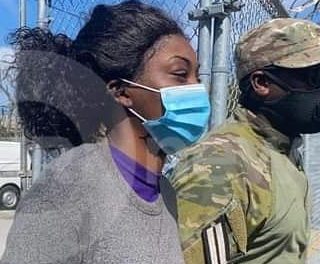 NASSAU| A 25-year-old woman who tricked prison guards into believing she was a lawyer in order to smuggle contraband to inmates will be spending 15 months in a real prison.Warnika Russell, of Zion Boulevard, took advantage of the prison’s policy not to search lawyers visiting inmates since September 13, 2020.After carrying out the ruse successfully 11 times, Russell was arrested on Friday when guards finally questioned her credentials.When police searched Russell, they found 2.6 pounds of marijuana and an Alcatel cellphone taped to her body.The officers found another 1.6 pounds of marijuana when they searched her apartment.She told investigators that convicted armed robber Stephen Greene had hatched the scheme.Russell, who didn’t have a lawyer, pleaded guilty when she appeared before Deputy Chief Magistrate Andrew Forbes.She said she went along with the scheme because she didn’t have a job and needed to take care of her five-year-old son.