Australian Olympic Legend Kerri Pottharst and St Clair Hodge at forefront with Shawn Seabrokes in the Background of Saint Kitts and Nevis competes during the Beach Volleyball Source:Getty Images
Tweet 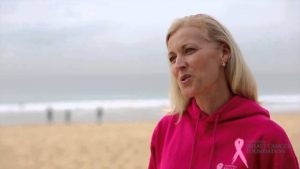 During the match the 52 year-old Sydney 2000 Olympic champion said the St Kitts players resembled “human lamingtons” with the sand stuck to their sweaty bodies. 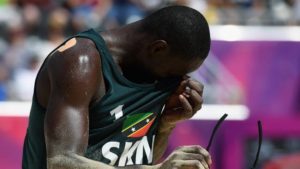 St Clair Hodge of Saint Kitts and Nevis takes his sunglasses off to wipe sand from his eye
Source:Getty Images

Pottharst’s comments about St Kitts and Nevis duo St Clair Hodge and Shawn Seabrookes went down like a led balloon with fans on social media, The Herald Sun reports.

“The commentator just said the dark skin from the player mixed with sand made him look like a human lamington GET THAT WOMAN OFF THE AIR,” one viewer posted on Twitter.

“Your commentator called a volleyball player a HUMAN LAMINGTON. Seriously?!?!” wrote another.

“I made a comment I unreservedly apologise for and sincerely regret,” she said.

Cooper later said her remarks were about the competitors’ style and technique, not their physical appearance.