St. Kitts-Nevis Former Prime Minister and now Leader of the Labor/NRP Opposition Dr. Denzil Douglas seems to be attracting much negative attention and he is once again coming under severe fire. This time it is for allegedly taking advantage of TWO of his Labor supporters.

An ardent labor supporter, Mr. Charlie Pemberton, the son of the well known St Kitts Labor Party supporter, Mr. Charlie Gumbs, took his plight to social media on January 2nd 2018 after waiting for three years to be paid by Douglas and Nigel Carty.
An angry and discouraged Pemberton claimed, “It was 3 years ago on New Year’s Day while I was still in bed, Nigel Carty call me to take some photos of the candidates for the upcoming election..”
Charlie painfully explained that his entire family are traditionally labor supporters “I grow up surrounded with a labor family and friends. My father Charlie Gumbs my mom Maisie Pemberton, big labor people and Carlos Gumbs my brother and I went all over with campaigning for Cedric Liburd. “ 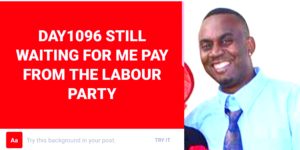 Despite having grown up in the bowels of the St Kitts Labor Party, the now grieving Charlie Pemberton describes how he feels about the St. Kitts Labor Party candidates “If anybody had tell me that the Labor Party is A HEARTLESS GOOD FOR NOTHING PARTY, I’d a tell them they wrong but the hardest thing is to know and NOW I KNOW that they are “heartless good for nothing” without even 1 ounce of love in they heart.!”
Pemberton continued to vent his disappointment with the Labor Party’s treatment towards him. “Up until this day they don’t want pay for my services. I tired beg.” He said woefully, “It is like they want me to forget it.”
“And to make it worst, he continued, “It is “nuts-change” that they (Douglas et al) can close their eyes and pay with all the millions they have. All am asking for is please pay me for my work. I done work so pay me. I know u all don’t have no love or no heart … at least when a work pay him am not begging. Marcella Liburd, you came to my house many times sit down and chat with my mom. She won’t be sleeping in peace knowing the Party the rally for is treating her son like that. Please pay me I have bills to pay children to feed.” Pemberton concluded almost in tears.

Like the 2010 Arab Spring uprising, where a series of protests and demonstrations across the Middle East and North Africa involving many Arab countries who rose up against tyrannical leaderships and effected change, even so today many other labor supporters are now crying out against the unfair treatment and broken promises dished out by the Labor Party.
Another well know Labor Party supporter, Canady Brown, also known as AU Brown and former owner of KYSSFM radio which is now allegedly  owned by Dr. Denzil Douglas, also developed the courage to speak out against the injustices slammed upon him by the Labor Party.
Mr. Brown also feels as if he is thrown under the bus. With tears welled up in his eyes, the saddened Labor Party supporter on his face book page inadvertently admitted that he is hurt. “Sadly for some time, I’ve been feeling the same way. It’s a shame. In my case, in March last year (2017) the Treasurer made an agreement to pay off the debt in ten months, which would have been at the end of last year.”
Mr. Brown is claiming that he previously made arrangements to have his debt cleared up by contributions from the Labor Party who never kept their part of the bargain. According to Mr. Brown, the Treasurer “then paid only half of the monthly installment and nothing else”
Clearly frustrated by the Labor Party he vowed never to again! “Unless I get paid I will not be supporting them again. YOU CAN’T TREAT YOUR SUPPORTERS WITH DISDAIN AND EXPECT THEIR SUPPORT.”