Basseterre, St. Kitts, January 29, 2016 (SKNIS): Prime Minister, Dr. the Honourable Timothy Harris, has expressed gratitude to the people for allowing him to serve at the highest level of the Government of St. Kitts and Nevis, during his appearance on the weekly radio and television programme “Working for You” on Wednesday, January 27.

“I must say I am honored and humbled by the opportunity to serve and I would wish that the legacy will be that at the end of this tenure of service, that the citizens and residents would feel satisfied having granted me a unique opportunity for the highest level of service that I perform creditably and satisfactorily,” Dr. Harris said. “In that regard, I would hope that one would be able to transform the lives of the people of St. Kitts and Nevis for the better and to ensure that the foundations are sufficiently strong so that long after one would have departed from the trust of the body politic those legacies continue to endure.”

The prime minister touched on a few aspects that his administration looks forward to, including the desire that the country be less partisan politically.

“We would hope that through the success of the Team Unity programme that has brought persons across the political divide to work together putting country above self that that of course would be inculcated as part of the new value system of every Kittitian and every Nevisian,” Dr. Harris said. “We would hope that as a result of this initiative that people (would) continue to value the consultative approach that we have embarked upon and which I, as the prime minister, have to ensure as part of the fulcrum of the way in which the government operates.  So there is no “one manism”, there is a team of people in leadership and of course somebody has to lead the team and for the time being I am providing that leadership to the team.” 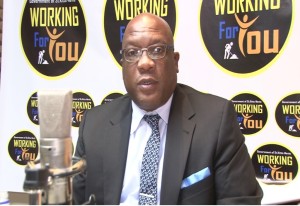 Dr. Harris, through that medium, took the opportunity to recognize the effort of the team members of Government.

“The Honourable Vance Amory has been a bulwark of support to the Team Unity administration and without his guide and support and counsel it is difficult to envisage that we have reached so far,” he said. “He has been an elder statesman within the government; he has been extremely good to me personally in this capacity. I equally want to thank the Honourable Shawn Richards as the Deputy Prime Minister and leader of the People’s Action Movement (PAM) party for his support, and honestly between those two leaders they have given me the requisite space in which to function and to provide the leadership to the team and so I thank them from the bottom of my heart.”

Special mention was also made of other members of the team including the Honourable Vincent Byron, Honorable Lindsay Grant, Honourable Ian Patches Liburd, Honourable Eugene Hamilton, Honourable Mark Brantley and Senator Wendy Phipps, as well as everyone in the high command of Government for their sterling support.

“We will continue to do well so far as we work as a team and we work, understanding that in our manifesto for 2015-2020 we put out the framework that will advance the country forward,” Dr. Harris stated. “I am satisfied that we have been working diligently on that contract and that we are fulfilling it.”