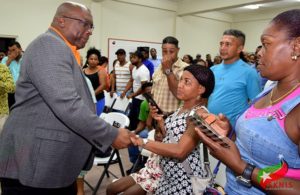 BASSETERRE, St. Kitts, (October 16, 2018 ) – The leadership style of Prime Minister Dr. the Honourable Timothy Harris remains the preferred option among the majority of the electorate in St. Kitts and Nevis, according to the findings of a national survey of public opinion carried out by prominent pollster and Director at Caribbean Development Research Services (CADRES), Mr. Peter Wickham.

Some 1,000 persons across all eleven constituencies in the Federation were surveyed during May and June 2018 using face-to-face interviews by a team of interviewers. Those surveyed were chosen based on a specific age and gender criteria, without respect to the type of house, race or any other factor.

Two other members of the Team Unity coalition, Deputy Prime Minister the Honourable Shawn Richards and Premier of Nevis the Honourable Mark Brantley finished with the third and fourth highest results at 15 percent and 12 percent, respectively. This, according to the report, suggests that “Team Unity leadership holds the support of 64 percent of those polled while Labour/NRP holds 36 percent.” Honourable Marcella Liburd and Honourable Konris Maynard received 3 percent and 2 percent, respectively.

Furthermore, as it relates to responses to the question that looked at traditional “Approval Rating,” the survey found that Dr. the Honourable Timothy Harris’ leadership has the approval of 56 percent of the population, compared to the 40 percent rating of Opposition Leader Dr. Denzil Douglas.

Importantly, the CADRES poll also found that if an election were to be held at the time of the survey, the Team Unity coalition would be re-elected to office. The response to the ‘party support’ question demonstrates that Team Unity has at this time been promised 45 percent of the total popular votes, while Labour/NRP would receive 27 percent.

This is not the first time a respected Caribbean pollster concluded that Prime Minister Harris’ leadership was favoured by the majority of Kittitians and Nevisians. In March 2017, Executive Chairman of Market Research Services Limited, Mr. Don Anderson carried out a survey in St. Kitts and Nevis at which point the majority of persons polled approved of Prime Minister Harris’ job performance, in particular his handling of the local economy.

Mr. Anderson correctly predicted the outcome of the last general election in St. Kitts and Nevis, based on polling data.