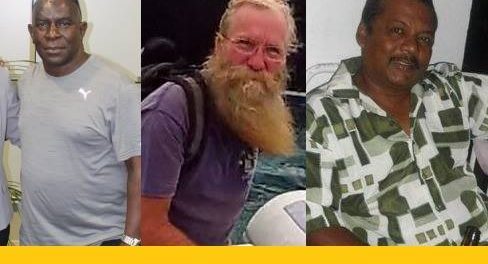 ROAD TOWN, Tortola, VI- Among the five persons that perished during Hurricane Irma on September 6, 2017, according to the Royal Virgin Islands Police Force (RVIPF), at least three is known to this news site.
They are Virgin Islander and track and field coach, Xavier ‘Dag’ Samuels; American citizen Richard A. Benson, and Guyanese Derek Ragnauth.
Police on October 9, 2017 stated in a press release that a family member has positively identified the male found on some rocks near The Moorings on September 7, 2017 as Richard A. Benson, 66, a native of California, residing in St John, US Virgin Islands.
Virgin Islands News Online had first reported that the body could be that of Mr Benson, who was reported missing in St John following Hurricane Irma.
Mr Benson’s body, according to relatives, will be taken to the United States for burial.
Body of Guyanese to be returned home
The body of businessman Derek Ragnauth, 55, will be returned to his homeland Guyana with assistance from the Guyana Government who will be providing an aircraft for its transport.
The man’s son Randy Ragnauth, an employee of the BVI Electricity Corporation, told the media in Guyana that while the family sought shelter at a sister’s home, which had hurricane shutters, Mr Ragnauth (Sr) chose to stay at his place of business in the East End area.
Randy said the house they were staying in was destroyed but they managed to hold out in a bathroom until the eye of the hurricane passed when they managed to seek shelter at another building in the area.
It was the next day that his father’s body was recovered at his place of business in Vanterpool’s Estate. The roof of the building had collapsed on him.
Coincidentally, Mr Derek Ragnauth had survived an armed robbery attempt at this business place in December 2016. He was shot in the arm.
‘Dag’ Samuels to be laid to rest on October 21, 2017
Meanwhile, the funeral service for popular coach Xavier ‘Dag’ Samuels will be held on October 21, 2017 at the Methodist Church in Sea Cows Bay.
The Royal Virgin Islands Police Force (RVIPF) has not officially revealed the identities of those killed during Hurricane Irma, except for Mr Richard A. Benson.
Category 5 Hurricane Irma, the most powerful hurricane ever recorded in the open Atlantic claimed at least 70 lives as it tore up the Caribbean and the southeastern United States. The death toll continues to climb in the aftermath.