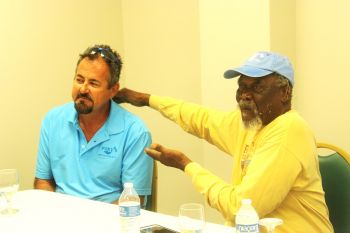 The now resigned Director of Operations at Foxy’s Beach Bar in Great Harbour, Jost van Dyke, David Dietrich, left, said he was only about looking into the best interest of Mr Philiciano O. Callwood MBE aka ‘Foxy’, right, who he said feels cheated by his own family. ROAD TOWN, Tortola, VI- An American expatriate, David Dietrich, has been accused by the Callwood family on Jost van Dyke of trying to con Virgin Islands cultural icon Mr Philiciano O. Callwood MBE aka ‘Foxy’.

The now resigned Director of Operations at Foxy’s Beach Bar in Great Harbour, Jost van Dyke, David Dietrich has; however, said he was only about looking into the best interest of Foxy, who he said feels cheated by his own family.

Mr Dietrich and Foxy called a press conference at Maria’s by the Sea on Monday, October 14, 2019, in a quest to clear the air over reports rife on social media that Mr Dietrich was scamming Foxy.

Foxy told the media he had given Mr Dietrich authority to handle his interest in Foxy’s Group of Companies, of which he is part owner, as he found out the bar and restaurant business on Jost van Dyke was broke and was not prepared to let it continue like that.

Further, Foxy accused his wife, Theresa Callwood aka ‘Tessa’, and children of deserting him and that they were not deserving of anything from him.

Mr Dietrich accused the Callwood sons, mainly Greg and Dean, of threatening him and his family and said the matter was reported to the police. Both Greg and Dean were at the press conference and maintained their accusations that Mr Dietrich was a con artist.

Meanwhile, Theresa Callwood accused Foxy of reckless spending of the company’s finances, including for a boat that cost over $200,000, which was done without the knowledge of the partners of the company.

She also said not because there wasn’t money in the bank meant that the company was broke.

Both families traded allegations and harsh words against each other, indicative of a deeply split family, with Foxy seemingly in isolation.

Tessa Callwood told the media she also believes Mr Dietrich was trying to take advantage of Foxy in his old age. Foxy is 81 years of age.

During the heated and sometimes ‘explicit’ press conference, which was streamed live by some media houses, Mr Dietrich resigned verbally, saying he was concerned about his safety as well as his family’s.

It was then revealed that Theresa Callwood had come with a termination letter for Mr Dietrich. Callwood also said the internationally popular Foxy’s Restaurant and Bar would be reopened.

She said it was closed due to environmental health issues, which according to her, was sabotage done by Mr Dietrich.