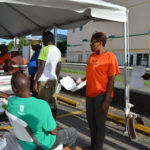 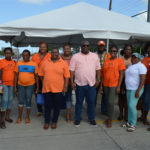 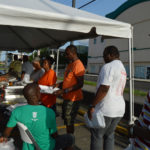 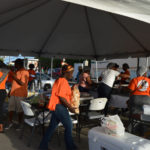 Branch Chairperson Senator the Hon Akilah Byron-Nisbett, who is also the National Deputy Political Leader of the Peoples Labour Party, said that funds raised at the breakfast and those to be raised in other future fundraisers will be used in the lengths and breath of Constituency Number Three to assist those who need a helping hand.

“Our community initiatives would involve helping persons with simple things as being able to provide wheelchair access in homes where there is none, or even helping someone to build a bathroom in their home,” observed Hon Byron-Nisbett.

“Those are simple things and you cannot expect government to provide everything. We are looking into the community and seeing what is it that we can do as individuals to give a helping hand to persons on the smaller levels, therefore have a greater impact on the lives of people in the community.”

The fundraiser breakfast which was held at parking lot opposite Best Buy Supermarket in Camps, was attended by the Peoples Labour Party’s Political Leader and Federation’s Prime Minister Dr the Hon Timothy Harris, and other members of the PLP National Executive. Also giving support were members of the PLP Branch #7 Women Empowerment Group.

“We are thankful that the Prime Minister came and his presence was here and felt. We are thankful for the support he continues to render to Constituency Number Three as we work together to build a strong Peoples Labour Party and therefore a strong Team Unity,” said the PLP Number Three Branch Chairperson.

Hon Akilah Byron-Nisbett further explained: “It is for us to aim towards creating a sense of community again because once we are hopeful that once persons see what we are doing and what we can do to help persons in our community, it would trigger more community spirit and more persons will be willing to assist other persons within their own communities as well.”

All the Constituency Number Three Branch Executive members, including National Executive Youth Arm Representative Mr Damian Weekes, had turned up and had been busy before 6:00 am when the breakfast was scheduled to start. The turnout was very good as all the printed breakfast tickets sold out, while there were a great number of persons who walked in to get a share of the breakfast.

Buoyed by the success of the fundraiser breakfast, Hon Byron-Nisbett said that they were hopeful that along with the other fundraisers, that they will be able to do a number of the community initiatives planned for the community.

“We are thankful for all the persons who contributed in any way to the breakfast, persons who would have provided meals, or provided us with the ingredients that we needed,” concluded Senator the Hon Akilah Byron-Nisbett.

“To those who would have come out and purchased breakfast, we want to say a heartfelt thank you to one and all and we guarantee you that these initiatives, this breakfast along with other fundraiser initiatives will be put to good use within Constituency Number Three. We are looking forward to future endeavours – future fundraisers.”