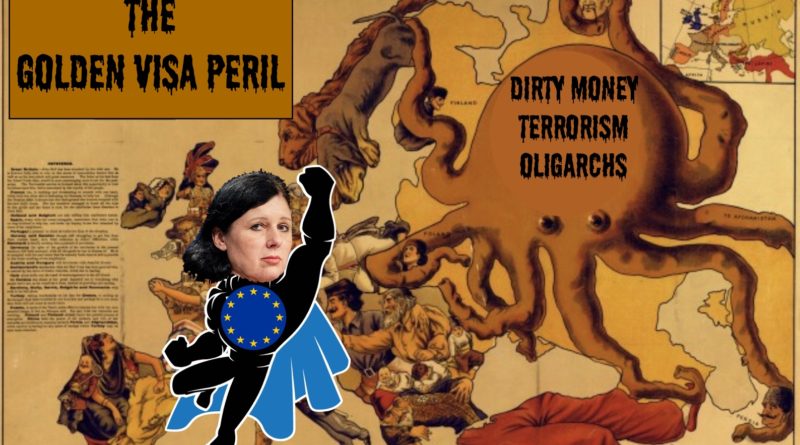 Opinion of the editor

The European Commissioner for Justice, Vera Jourova, has called citizenship by investment programs (CIPs) a “serious security risk“, launched an investigation into the matter, and is preparing a new set of (mandatory) procedural recommendations to European CIP-countries. But CIPs are not the menace to European peace and stability that Jourova – and others – make them out to be. Here’s why.

Obtaining a citizenship by way of investment entails subjecting yourself to an exhaustive list of measures designed specifically to weed out individuals who have, have had, and may in the future have nefarious intent or criminal proclivities.

The documentation an applicant must hand over includes (but is certainly not limited to):

In addition, most of the above needs to be notarized and/or apostilled.

Watch: Saint Kitts CIU-Boss’ Walks Us Through His Due Diligence Process Step by Step

Once a client has undergone the rigmarole of procuring the above-mentioned documents (and many more), he must turn them over to trained government agents that will go through them with a fine-toothed comb, looking for any stray hair they can find to flag the file.

But it doesn’t stop there, of course.

The government, in turn, hands the file over to professional due diligence firms – like Exiger, Thomson Reuters, or IPSA – whose full-time job is to verify your information by any means necessary, be that by calling your boss from 20 years ago to ask whether anything ever went missing during your shifts, or by visiting that house you say you own on the shores of the Caspian Sea to ascertain that it does, in fact, have a 17th century wine-cellar.

As if this weren’t enough, all your information (possibly including adverse information uncovered during the aforementioned procedures) passes by the desks of local and international law enforcement such as police and Interpol , often also the US State Department, as well as intelligence bureaus.

Now, ask yourself: If you were a successful money launderer, or an aspiring suicide-bomber, or if you had an illegitimate child conceived with a waitress after a conference cocktail mixer in Cleveland in the fall of ’86 (no offense to waitresses – or people from Ohio), why would you embark on a process that has a better chance than almost any other type of background check of uncovering the skeletons in your closet? Especially considering who will hear about it if something is unearthed.

If you had prepared some sinister plot to drive a truck into a Christmas market or to siphon off the proceeds of your pyramid scheme, why would you willingly give multiple law enforcement agencies your fingerprints, your iris-scans, and your cousin’s phone number?

Wouldn’t it be a lot easier to get into the EU by paying some Lithuanian undergraduate 20,000 for her hand in a pro forma marriage? This brings us to the second reason CIPs pose no substantial security risk to the EU:

Beyond suddenly finding love on a Vilnius university campus, plenty of other routes to the EU are more feasible than going through a CIP:

You could overstay your tourist visa, or be a stowaway on a cargo vessel, for example.

More than a million undocumented immigrants entered Europe in 2015 and while, I’m sure, many were honest people with good intentions, we know that quite a few of them were not. I’ll go out on a limb and say they probably weren’t subjected to four-tier due diligence upon arrival at 4 AM on some beach in Sicily, and they didn’t have to shell out a million euros either.

“The granting of citizenship poses a serious security risk because it gives beneficiaries all the rights of EU citizens and allows them to move freely throughout the Union,” Jourova told Germany’s Die Welt in August. If that’s the case, wouldn’t it be more pragmatic to devote the grave concern and media attention to the 99.9% who became EU citizens by routes other than CIPs?

I’m not saying all CIP-participants are good people; there are lugubrious characters in their midst, no doubt. But at least we spend months vetting and building a file on them. CIP-applicants are probably the category of immigrant least likely to cause trouble and – if they end up doing so anyway- the easiest to find.

#3 – Citizenships can be – and have been – revoked post hoc.

Even if individuals of questionable background and intent domanage to get through the needle’s eye of CIP due diligence, the issuing state can still deprive the individual of his or her citizenship at a later time, if the individual in question’s transgression is disconcerting enough to warrant it.

This week, Finnish law enforcement arrested a Russian national holding a Maltese passport (whether he obtained it through the MIIP remains unconfirmed, but it appears likely) on suspicion of involvement in a money-laundering operation.

Under Malta’s Citizenship Act, the Prime Minister may revoke the citizenship of naturalized individuals if they receive a jail sentence of 12 months or more within seven years of becoming Maltese. If the man in question is convicted and sentenced to more than a year in prison, Malta’s government will likely strip him of his citizenship.

Saint Lucia, another example, recently revoked the citizenships of six individuals on the grounds that they had committed actions that may bring the country into disrepute. This happened only months after the Saint Lucia Citizenship by Investment Unit approved the applications, once new information about the individuals had come to light.

This is to say that CIP-country governments have recourse. There are fail-safes, not only at the front-end but also retroactively. Malta and Cyprus can change their minds about an applicant if he turns out to be a scoundrel.

CIP-countries run significant risks by naturalizing new citizens of all types, whether through marriage, years of physical residence, or CIPs (although the risk is considerably lower for those naturalized through CIPs, as explained above) because there’s no telling how those individuals will comport themselves in the future.

Read also: EU to Use “All Legal and Psychological Tools” to Force CIP-Country Compliance With New Guidelines

They may be clean as whistles now but could end up bringing shame, or inconvenience, or economic problems to their new home country. The damaging acts of a single individual may, for instance, cause all his compatriots to lose their visa-privileges, end up on a travel-ban list, become subject to trade sanctions and so on.

CIP-countries really don’t want to naturalize the wrong people; too much is at stake and the countries in question are perfectly happy to miss out on the tens of millions of euros a year in investments they would otherwise have received from crooks because the alternative is far more costly.

The EU’s Penchant for Tilting at Windmills

Due diligence and thorough background checks on applicants are integral to the proper functioning and risk-management of citizenship by investment programs. But the European Commission’s devoting disproportionate amounts of media coverage and time to the class of immigrants that is both the least numerous and the least likely to be delinquent is a frivolous – albeit media-friendly – pursuit of largely imagined boogeymen.