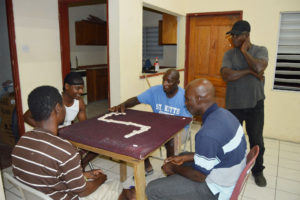 The league, as the name suggests is the brainchild, and is sponsored by the area Parliamentary Representative Dr the Hon Timothy Harris, who is also the Prime Minister of the Federation of St. Kitts and Nevis. He is also the Political Leader of the Peoples Labour Party (PLP) one of the three parties in the ruling Team Unity Administration.

“I would like to thank our sponsor Dr the Hon Timothy Harris for his trustworthiness in our community and his constituency, as he has made sure that things in this domino league have been going well for twenty-two years,” said League Organiser Mr Calvin Farrell. He has been the organiser from its inception.

According to Mr Calvin Farrell, the league plays an important role in keeping young people busy as they have embraced it. “I am very thankful to see that young people are coming out to play the game that they so love. Community based activities like these can help to keep down incidences of crime in our country, because when young people are positively engaged they have less time on their hands to get involved in anti-social behaviours. I am happy to see young people coming on board and greatly appreciate the Prime Minister’s support.”

The league will be executed in a round-robin format where all teams will have to play each other, after which the top four will go into a playoff to determine the winner and runner-up positions. The second round of matches will be played on Tuesday August 15.

Defending champions Unity who faced Giants at the Lodge Project Community Centre received an early scare when Giants went up 5-0. Captain Edmund ‘Fergie’ Rawlins of Unity said: “We had to put our foot down as we are the champions and we did not want to lose in the first round.”

He had every reason to feel worried as the team they were facing was a new entrant. True to his word, they turned tables on their opponents with such a force that it left Giants flatfooted for the champions to win the first round at 13-7.

He further observed that it is their intention to give everyone a chance to get something out of this year’s league and that being the case, “we will have the best of the rest at the end of the season. So everybody gets something, as long as they participate in the competition.”

In conclusion Mr Farrell said: “The games on Thursday night were well attended and we are looking forward to the second round on Tuesday August 15. I have been at the helm of this league’s organisation because I love it. When you love something you have the passion to do whatever it takes to make the competition better and bigger every year.”