Seattle Police Dept. cars drive in a procession to the funeral for a slain Seattle police officer, Friday, Nov. 6, 2009, in Seattle. Hundreds of police vehicles from departments across the Northwest paraded with lights flashing to honor slain officer Timothy Brenton. Police continue to look for the killer who shot the veteran officer on Halloween night as he sat in a parked patrol car. (AP Photo/Elaine Thompson)
Tweet 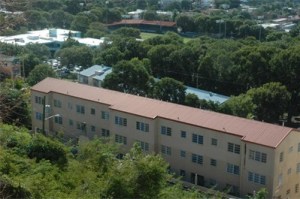 CHARLOTTE AMALIE — The shooting of a 21-year-old Atlanta man came to the attention of police after he sought treatment for his gunshot wounds at the St. Thomas hospital late Monday night.

Police were dispatched to the Schneider Regional Medical Center about 11 p.m. on Monday after the 911 Emergency Call Center reported that Raheem Luzunaris was being treated for gunshot wounds.

Luzunaris, a Georgia man who resides in Estate Tutu, received multiple gunshot wounds to the upper chest area. He was immediately taken into surgery and was unable to provide police with a statement.

Police with the Forensic Unit and Criminal Investigations Bureau responded to the hospital and later located the crime scene just south of the J. Antonio Jarvis School in downtown Charlotte Amalie.

This incident is currently under active investigation by the Criminal Investigation Bureau.